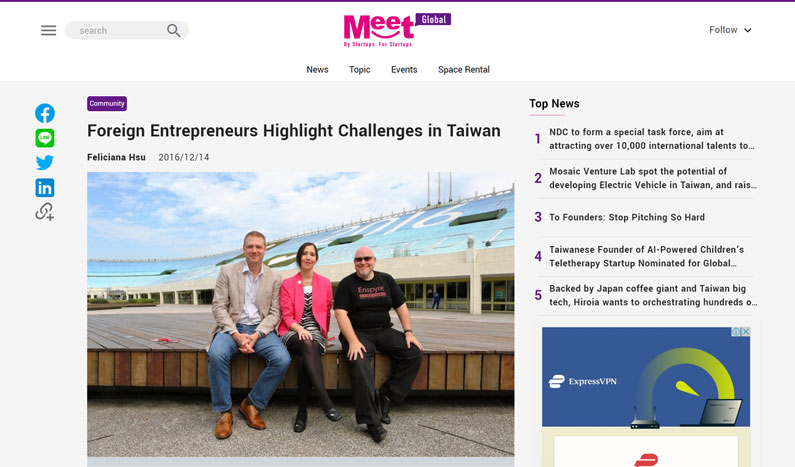 Dragons’ Chamber is launching and we are very grateful to Business Next for saying nice things about us. To ensure we never lose their nice words we have taken the liberty of copying their text here.

Link to the article: https://meet-global.bnext.com.tw/articles/view/39232

Establishing one’s own business can be very difficult, and it can be even more difficult if the owner has to overcome language barriers and government regulations.

In light of this, Meet Taipei 2016 welcomed foreigners as part of the “Dragons’ Chamber Taiwan” event, the first demo show for foreigners who have startups in Taiwan.

The only requirement was that the startups were begun by non-Taiwanese citizens.

The purpose of the event was to provide a bridge between angel investors and foreign entrepreneurs in Taiwan.

Dragons’ Chamber Taiwan was the brainchild of John and Carrie Kellenberger, who both work for the Canadian Trade Office in Taipei.

Another key driver behind the event, and panel member, was Elias Ek, the CEO of Enspyre and author of the book “How to Start a Business in Taiwan.”

The inspiration for this event was the “Dragon’s Den” reality show in which angel investors are the “dragons”.

Every startup has ten minutes to pitch their idea, and five minutes for Q&A.

Unlike some demo shows, the Dragons’ Chamber was not limited to technology companies.

The focus was on new ideas.

In their opinion, the rather small size of the Taiwan market makes this difficult.

However, Taiwan still has a charm that attracts foreigners, and is a convenient place to live.

It has a good central location in Asia, being close to China, Japan and Korea.

Also, Taiwan is home to many technologically savvy people, which is also attractive to foreign entrepreneurs.

One factor that Taiwan should consider is the ease of interaction with the government and financial institutions. How can this be made easier for foreign startups?

Although no law in Taiwan forbids loans to foreign entrepreneurs, it’s very difficult for them to receive one.

Lacking connections and the qualifications to obtain loans, foreign entrepreneurs are struggling to obtain the capital needed to continue their business here.

Data shows that 62% of foreign entrepreneurs have no access to bank services, including loans and credit cards.

Mr. Kellenberger had a bad experience when set up a company here.

He paid a security deposit and had lived in Taiwan for over a decade, but he still failed to obtain a loan from a Taiwanese bank.

Obtaining a visa is another issue worth discussing.

The Kellenbergers have stayed in Taiwan for 10 years, while Ek has been here for 17 years.

But they said that they haven’t been able to become Taiwanese permanent residents yet, indicating the rather strict approach on this matter in Taiwan.

He said this makes him think twice about staying in Taiwan or going home to rejoin his parents.

Japan, by contrast, has a new policy that allows talented people who have worked over a year in the country to become permanent residents.

Taiwan has a similar rule, but the minimum working period is five years.

In addition, other difficult requirements must be met.

The last challenge is the government and the banks. Ek said he had a friend who applied to set up a company in Taiwan.

Later, the friend received a call from the National Taxation Bureau.

During this unhappy call, the Bureau said that there was once a foreigner who did not pay a tax liability.

According to the story, because of this he couldn’t open a business.

“This is a huge limitation for Taiwan, which also limits the opportunity for Taiwan,” Ek said.

We Love Taiwan and Want to Stay Here

Ek pointed out that an important point is that once a foreign entrepreneur sets up a firm in Taiwan, it is a Taiwanese firm and not a foreign entity.

Mr. Kellenberger emphasized that “We love Taiwan and we do want to stay here to bring more opportunities here.

However, if the government doesn’t change its way and warmly encourage more foreign entrepreneurs, surely it will be difficult for many to stay here.”

This year is the first for the “Dragons’ Chamber”.

The goal of the event was to be a benign bridge for breaking through barriers.

In the future, they hope to have more “Dragons” (angel investors) to join the event.